URBANA – The Urbana Civilian Police Review Board (CPRB) disagreed with the conclusions of Police Chief Bryant Seraphin at an appeals hearing held on February 12th, 2021. It was a rare occurrence, perhaps even the first time since the inception of the CPRB in 2008, where the board determined that the chief’s findings is not supported by the evidence presented.

The appeals hearing was held to review a complaint regarding the right to record a police officer.

According to Chief Seraphin in his findings letter to the complainant, “I find that Lt. Joel Sanders and Lt. Matt Bain exhibited proper conduct. I understand that you were not satisfied with the nature of your encounter with either officer, and I regret that is the case. However, I find nothing that would support a finding that either acted inappropriately.”

As part of the appeals process, the complainant and representatives from the Urbana Police Department had a chance to present their case during the closed session of the hearing.

According to the complainant, “This may be the first time that the CPRB has ever voted against a determination made by the Urbana Police Department. Before this, it wasn’t even clear if the CPRB was capable of disagreeing with the Police Chief. In that sense, this is an encouraging turn of events, but I’m still wary. Unfortunately, due to the very closed nature of the review process, we really don’t know anything other than that the Board members did not agree with the Chief’s original findings. That’s all we know. The process is very opaque and since we may never get to understand any details, we’re not really building community trust and understanding.”

The CPBR appeals hearing can be viewed here: 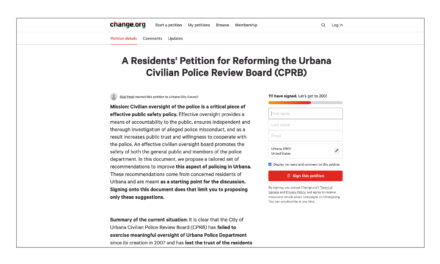